Home/News/Jannis Tautz-Weinert, one of the AWESOME researchers, presented a study case at the Conference of Wind Power Drives (CWD 2017)
Previous Next

Jannis Tautz-Weinert, one of the AWESOME researchers, presented a study case at the Conference of Wind Power Drives (CWD 2017) 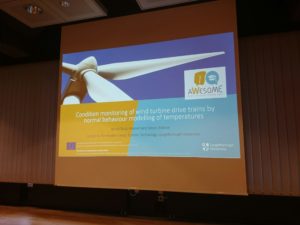 Between 7th and 8th of March, the city of Aachen (Germany), hosted the the 3rd Conference for Wind Power Drives (CWD 2017).

In this study, several normal behaviour modelling techniques for condition monitoring were compared in a case study. Additionally, different alarm generation techniques were tested to assess how the observed gearbox failures can be detected as early as possible. Early detection of a gearbox failure could be demonstrated, although challenges in achieving a reliable monitoring system became apparent.

The CWD 2017 was held simultaneously with the Drive Train Technology Conference (ATK 2017) and together attended by nearly 400 participants, both from academia and industry. Multiple wind turbine manufacturers (OEMs) and important suppliers of drive train technologies as well as wind farm operators were represented.

In this edition 40 presentations were offered to the participants of the CWD, covering various topics in the field of wind turbine drive train technology. On the other hand, 4 plenary lectures which were held for the large audience of CWD and ATK participants together. Also, a very interesting speaker’s corner presentation was offered at the visitation of the intitute’s testing facilities.